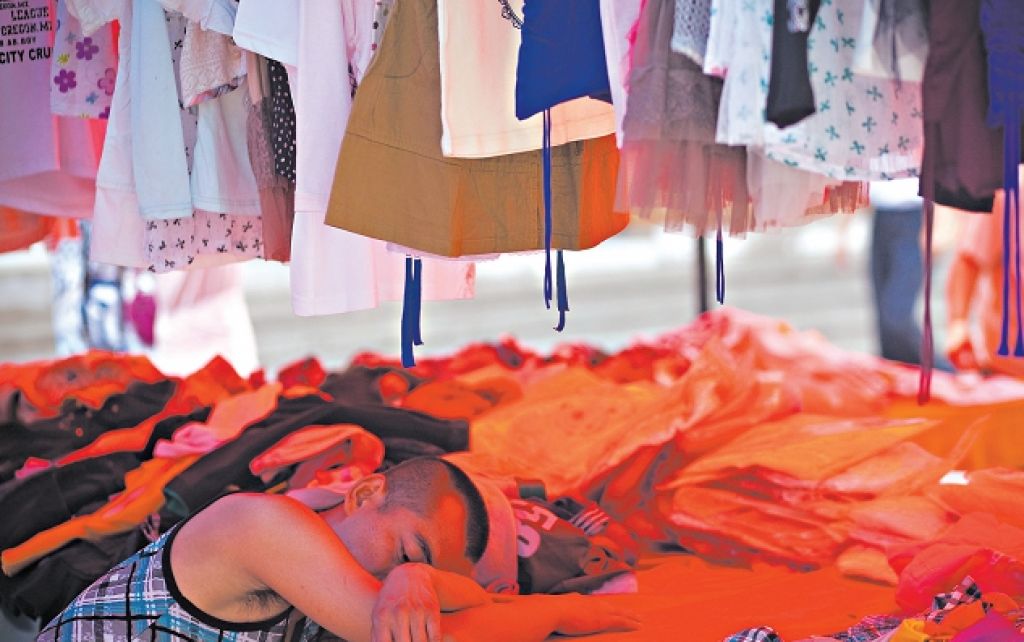 The value of Chinese families' nest eggs is shrinking, through no fault of their own. Under an economic system that favors state-run banks and companies over wage earners, China's government keeps the interest rate on savings accounts so artificially low that it cannot keep pace with rising inflation. At the same time, a weak social safety net, depressed wages and soaring home prices create a hoarding impulse that compels many people to save anyway.

Indeed, economists say this nation's decade of remarkable economic growth has to a great extent been underwritten by the household savings - not the spending - of the country's 1.3 billion people.

This system, which some experts refer to as state capitalism, depends on the transfer of wealth from Chinese households to staterun banks, government-backed corporations and the affluent few who are well enough connected to benefit from the arrangement.

"This is the foundation of the whole system," said Carl E. Walter, a former J. P. Morgan executive who is co-author of "Red Capitalism: The Fragile Financial Foundation of China's Extraordinary Rise."

"The banks make loans to who the Communist Party tells them to," he said. "So they punish the household savers in favor of the state-owned companies."

Unless China starts giving its people more spending power, some experts warn, the nation could gradually slip into the slow-growth malaise that now afflicts the United States, Europe and Japan. Already this year, China's economic growth rate has begun to cool off.

It is not just China's problem. Economists say that for China to continue serving as one of the world's few growth engines, it will need to cultivate a consumer class that buys more of the world's products and services, and shares more fully in the nation's wealth.

With the faltering economies of the United States, Europe and Japan limiting China's ability to continue relying on growth through exports, the Chinese government knows the importance of giving its own consumers more buying power. Already, the central government has pushed to raise rural incomes and has even offered subsidies to buy cars and household appliances.

China's consumer spending has plummeted in the last decade as a portion of the overall economy, to about 35 percent of gross domestic product, from about 45 percent. That is by far the lowest percentage for any big economy anywhere. (Even in the stalled American economy, the level is about 70 percent of G.D.P.)

"If China is going to continue to grow, this system will have to change," says Michael Pettis, a professor of finance at Peking University. "They're going to have to stop penalizing households."

The Communist Party has promised to bolster personal consumption. But doing so would risk undermining a pillar of the country's current financial system: the household savings that support the government-run banks.

Here in Jilin City, the state banks are full of money from savings accounts. The banks use that money to make low-interest loans to corporate beneficiaries - including real estate developers, helping fuel a speculative property bubble that has raised housing prices beyond the reach of many consumers. It is a dynamic that has
played out in cit ies throughout China.

Meanwhile, China's central bank in Beijing also depends on the nation's vast pool of consumer savings to help finance big investments in the foreign exchange markets, as a way to keep the currency artificially weak. The weak currency helps sustain China's mighty export economy by lowering the global price of Chinese goods. But it also makes imports unaffordable for many Chinese.

Consumer choice in many cities is confined largely to the limited offerings of state-run stores and small shops. Sales of global "brands" come mainly in the form of counterfeits.

If China is to make consumer spending a larger share of the economy, it will need to encourage big changes in the habits of people like Wang Jianping, a highway design specialist, and his wife, Shue Wang, who ret ired seven years ago.

The Wangs, both 52, have an annual household income of $16,000 - more than double the national average for urban families. They own a modest apartment in Jilin City. They paid for their son's education at prestigious Tsinghua University in Beijing. And they are prodigious savers, with $50,000 in a state-run bank.

But the Wangs feel pressed. They do not own a car, and they never shop or go out to eat. "We don't like to spend tomorrow's money today," said Ms. Wang.

But tomorrow's money may not be worth as much as today's - not as long as their savings account earns only a 3 percent interest rate while inflation lopes along at 6 percent or more.  Yet the Wangs are afraid to invest in
China's notoriously volatile stock market. Chinese law sharply limits their ability to invest overseas. And real estate speculation might prove risky if the bubble bursts.

Like many in China, the Wangs save because they worry about soaring food prices and the high cost of health care. Why would China deliberately suppress the consumer market that might help it reach its goal?

Some analysts trace the current policies to the late 1990s. That's when the bloat of China's giant, uncompetitive
state-run corporations nearly brought the country's economic expansion to a standstill. With state-owned companies facing bankruptcy, the state banks were burdened with hundreds of billions of dollars in nonperforming loans; many banks faced insolvency.

To avert a crisis, Beijing let state-owned companies lay off tens of millions. And to shore up the banks, Beijing assumed tighter control over interest rates, which included sharply lowering the rates paid to depositors. An account that might have earned 3 percent in 2002, after inflation, would today be effectively losing 3 to 5 percent, factoring in inflation.

That is how Chinese banks can provide extremely cheap financing to state-owned companies while still recording
huge profits. It has also helped the banks provide easy financing for big public works projects, like the high-speed train system, the 2008 Beijing Olympics.

It was during this same period that the Communist government discarded the promise of lifelong employment and state health care. Beijing shifted more of the high costs of social services onto households and the private sector. The system took an enormous economic toll on personal pocketbooks.

Raising consumption will require a radical overhaul of the economy - not just weaning state banks off household subsidies but forcing state-run firms to pay higher borrowing rates. It would also mean letting the currency rise closer to whatever value it might naturally reach.

It would mean, in short, a significant dismantling of the state capitalism that has enabled China to come so far so fast. "To get consumption to surge," said Mr. Pettis, "you need to stop taking money from the household sector."